In the News
You are here: Home1 / In the News2 / Crisis of the Week: Pharma Firm’s Drug Price Controversy 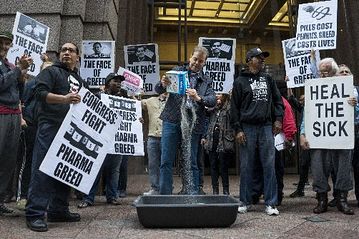 Protesters angry about Turing Pharmaceuticals’ price increase for the drug Daraprim stand outside the company’s New York offices on Oct. 1, 2015.

The crisis experts look at the on-gain, off-again price hike for the drug Daraprim by Turing Pharmaceuticals. The company came under fire when it raised the price on Daraprim, a drug used to treat the parasite infection tonoplasmosis, from $13.50 a pill to $750 a pill—an increase of 5,000%. The company’s chief executive, former hedge fund manager Martin Shkreli, at first defended the increase, which took effect after Turing purchased Daraprim from another pharmaceutical firm. He said the previous company wasn’t making money from the drug and that the increase was necessary for Turing to “stay in business.” After getting heavily criticized for raising the price of the drug, the company backtracked and agreed to “work directly with any patient or institution to ensure anyone who needs Daraprim will receive it,” and offering to give it away for free to qualified uninsured patients. The company didn’t say what the new price would be. Looking solely at the statements made by the company and Mr. Shkreli, and only those comments included in the links provided here, the experts dissect the company’s actions and how it’s handled this crisis. Where did it do well? Poorly? How should it proceed? Jolie Balido, president, Roar Media: “A few weeks ago, few people knew Martin Shkreli. Now he’s called the ‘most-hated man in America.’ This isn’t just because the Turing CEO hiked prices of the life-saving drug Daraprim from $13.50 per tablet to $750, it’s that he did so without first considering–and anticipating–how the public, not solely company investors, would greet the news. “His approach has been anything but textbook. He’s accused of being ‘32 but acting half that age on Twitter,’ blasted as a ‘public enemy,’ and perceived as cold, callous and flippant. Meanwhile, Turing’s backpedaling comes a little too late. Its CEO’s media antics have already made it the poster-child for a national political ​debate on pharmaceutical ‘price-gouging.’ “While I cannot offer an enlightened evaluation of Shkreli’s business thinking, I can say business decisions should involve proper public relations planning. Crisis management should begin when life is good, before the crisis. Companies should cultivate positive relationships with reporters so they can be in a better position when they have to make announcements or defend themselves. They should use thoughtful, strategic messaging and secure independent, credible industry thought leaders to support them publicly when crises break. “And calling journalists ‘morons’ on Twitter–or anywhere else–is never a good PR strategy.”     Anthony Johndrow, co-founder and CEO, Reputation Economy Advisors: “Turing finds itself in a reputation Bermuda Triangle with the Daraprim price increase–they are looking to make money on sick people, they are a ‘big pharma’ company and their CEO is a hedge fund guy. They put themselves there by taking a difficult-to-explain action too quickly and then made it worse by attacking those who raised the issue via Twitter. “There is no way they could have explained an overnight price increase of something by 5,000%, especially not after they were ‘caught’ doing it, rather than communicating about it proactively. To then try to justify the hike by saying they needed the profits to fund research into better therapies sounds horribly false, especially when the message comes from a finance guy, as opposed to a physician or researcher. “Even if the reasons were good overall for doing this, putting this CEO, with his background, out as the face of the company was a bad idea. The Sept. 24 press release put out by the company lays out a plan for supporting the vulnerable patients threatened by this price increase, but this should have been done in advance. Kudos to Turing for ending up with the right message, but shame on them for not realizing the potential fallout of sailing into the troubled waters of our convoluted health-care system.” Write to Ben DiPietro at ben.dipietro@dowjones.com, and follow him on Twitter @BenDiPietro1.

Crisis of the Week: Zenefits CEO Resigns After Compliance Failures Marketing Strategies From The Top: “Send a personalized “thank you” note after meeting with a business prospect” All eyes on Publix: What crisis experts have to say about a rough week Dodge the Mud Balls and Keep your Reputation Spic and Span: Part 1 (of 2)